The Shadow of RPGs 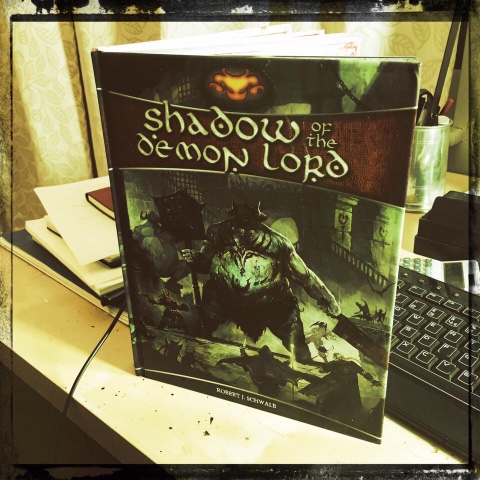 This wonderful slice of darkness turned up recently, and sparked equal excitement and nostalgia in me. Shadow of the Demon Lord is a traditional, pen-and-paper RPG (roleplay game, like Dungeons and Dragons if you must). It is written by Rob Schwalb, who - if modern RPGs are ruled by a pantheon of super-powerful supernatural beings - is a demon lord of RPGs. On many levels Shadow of the Demon Lord is my kind of thing; it has demons, and a grim take on fantasy, and a polished game system under the hood. On another level just picking this up and reading through it made me smile, and do some reflecting on the past.

I used to run a lot of RPG games, and collected source and system books to the extent that they took over the room I rented when I was a student. I also earned my first real money and writing credits working on RPGs. Coincidently one of those first writing jobs was with Rob, on a little game called Dark Heresy. I won't lie - it was great. I learned how to hit a deadline, how to survive an acidic review, how to collaborate with other creatives, and all kinds of other things the books don't tell you*. I also got to work with a gab bag of talented people: Alan Bligh, of Forge World fame, Mike Mason, who now holds the reigns of Call of Cthulhu at Chaosium, Kate Flack, Owen Barnes, and Rob to name only a few,

That was ten years ago this year, which seems an implausible length of time, but the calendar tells me it's true, and so it must be. Looking through Shadow of the Demon Lord it does not seem that long ago at all. It seems like yesterday.

*Thinking about it maybe I should write down some of those lessons, maybe even on this blog.