'Cool, but what is this Horusian War thing?'

Prompted  by a few short stories I did last year, questions like this keep coming up. Which is great, because at the back of all authors' skulls lurks the dread that we have decided to tell a story that no one will be interested in. But, thankfully, you guys are intrigued, and the questions have made me think that I should give some kind of answer on what the Horusian Wars are. So here I am, not with one answer, but, of course, with several.

Answer 1: The Horusian Wars is my next 'thing'.
By 'thing', I mean the topic of most of my writing for Black Library at the moment (apart from the Horus Heresy, and no, I haven't forgotten Ahriman).

At the core of the Horusian Wars is a series of novels. The first book is done, and was announced at Black Library Live last November https://www.warhammer-community.com/2016/11/23/what-we-learned-at-black-library-live/.

It's called Resurrection and it is out in the summer.

Here is the nearly finished cover, and the text from the back.


'War rages in the Caradryad Sector. Worlds are falling to madness and rebellion, and the great war machine of the Imperium is moving to counter the threat. Amongst its agents is Inquisitor Covenant. Puritan, psyker, expert swordsman, he reserves an especial hatred for those of his order who would seek to harness the power of Ruin as a weapon. Summoned to an inquisitorial conclave, Covenant believes he has uncovered such a misguided agent and prepares to denounce the heretic Talicto before his fellows. But when the gathering is attacked and many left dead in its wake, Covenant vows to hunt down Talicto and discover the truth behind the mysterious cult apparently at the heart of the massacre. In the murky plot into which he is drawn, Covenant knows only one thing for certain: trust no one.'

Answer 2: The Horusian Wars are stories of a war between factions of the Inquisition


The Inquisition in Warhammer 40,000 is riven by different visions of truth and salvation, and arguments about how far is too far when you wield the authority of the Emperor. The Horusians are one such faction.

To quote from the classic Inquisitor game:

'…there are those whose beliefs go even further, and are known as Horusians. The Horusians look to the Primarch Horus who was a mighty being invested with immense Chaos power, and see an opportunity wasted. They believe that a new Horus could be created, invested with great energy from the Warp, but one who would unite all of Mankind for its betterment, rather than enslaving it to Chaos.'

Needless to say those beliefs will play a role in things...

Answer 3: The Horusian Wars are lots of different stories

When I was writing the Ahriman trilogy, one of the things that happened almost accidentally was that the series braodened from novels into micro-shorts, short stories, and audio dramas. It all started when I was asked to write a short story to go with the release of Exile, and I wrote All is Dust. Another followed, and I found was enjoying exploring the side characters and stories so much that every time I was asked if I would like to do a story for an anthology, or a script for an audio drama, I would say 'Sure, I'll do something about Ahriman.' Eventually there were enough stories that they got their own anthology:  https://www.amazon.co.uk/dp/B01N75PTCS

I really enjoyed letting what began as side characters take centre stage. It's also one of the things about Ahriman series that people told me they really liked. Along with 'Are you doing another run of Ahriman?' the question I get messaged most is 'Can we have more Ctesias tales, please?'

So, as soon as Resurrection got a green light from Black Library, I knew I wanted to do extra stuff around Horusian Wars, but this time with more of a plan. That plan currently extends to lots of different types of stories and formats that fall into four main branches:

2) The arcana short stories – that's not an official title, but more how I think about them. Each story is a bit like a card from a tarot deck, and explorers the story behind one the characters from the series.

Two of them are out already:

The Purity of Ignorance 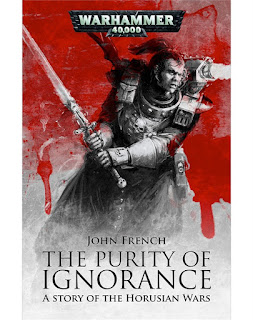 A story about Ianthe, one of Covenant's tame killers and field agents.

The Maiden of the Dream 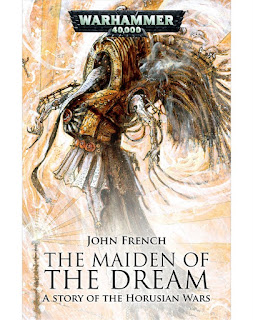 A story about Mylasa, a psyker who specialises in the extraction and removal of memories.

A third story is already written, and I hope to do more soon.

3) [Redacted] – how cool is that? Honestly, this is one project that makes me grin every time I think about it.

So there you go –now you know all there is to know, at least for now.