The Lamp Bearer - An AoS28 Character

May 22, 2017
Light. That's what they all ask for. No matter who they are, they want light. They want to see it again. They want to feel it's warmth on their face. They want to know that - in this age of night' tyranny - light still exists.'
- Azubiades the Elder

'Gods do not walk these realms. They abandoned us to the dark, and left only candle flames to comfort us.'
- inscription on a wall in the city of Azyrplos 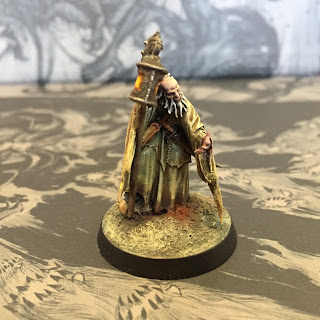 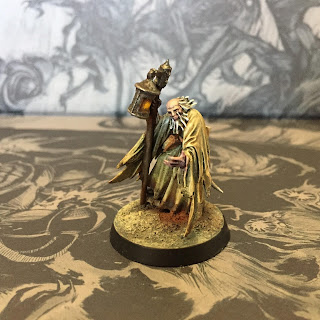 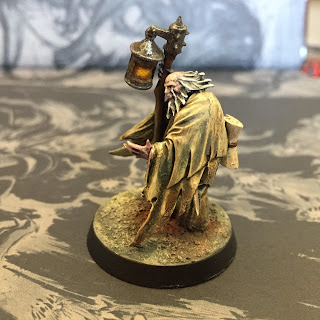 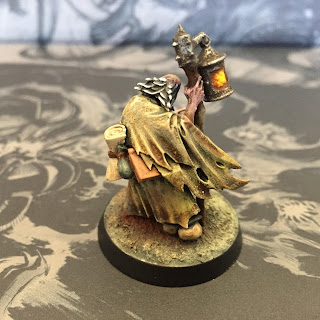 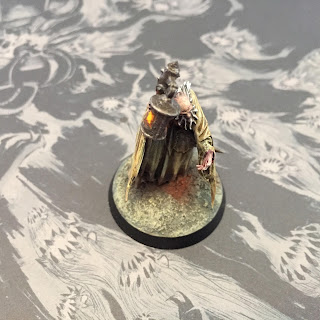 This is my first miniature for AoS28* - A blind Lamp Bearer of the Order of the Last Illumination. He is a vagabond daemon banishers, and spirit scourge who roams the tide line where Chaos has rolled back from the Mortal Realms. The Lamp Bearers are the most spiritually strong of the Order, a fact tested by starring into the brightest flame until they loose sight.. So tested they go out into the lands to face daemons, warlocks, and those who, in their hearts, are slaves to darkness.

Part preacher part exorcist, he carries a book of instructions for banishment bound in human skin, scrolls of abhorrence, and, of course, a lamp. The lamp is both holy symbol and weapon against the powers of Chaos. It's light is said to make the unclean shrink from its bearer, and even drive daemons from the flesh of the living.

Lightless Lands
The Order of the Last Illumination exist of the margins of the Mortal Realms. While Sigmar is waging war against Chaos, far away from these grand battles, there are lands where there has been no flash of liberating lightning, no warrior-heroes coming in glory to strike down the darkness.  Memories of hope and the power of gods cling to these lands, alongside the remnants of Chaos. Unclean spirits, starved daemons, blighted witches and those who still make offerings to the dark gods. They are benighted places where the dark lingers in the soul as much as in the sky. In such realms even the light of a candle is revelation.

Thought Notes
I really didn't start with an idea, I just started putting bits together and hacking at plastic. Well, sort of, because I did start with the Necromancer and that makes this part of a long tradition of Necromancer conversions. The thing that really pivoted the whole idea in my mind was when I found the lamp - a bit from the old Mordheim accessory sprue. That had an obvious link to heroes like the Lord-Castellant, as a tool for daemon banishing. It also fitted with the idea of bringing literal light to the dark. The idea of the Lamp Bearers being blind came once I had stuck the lamp in place. Looking at the miniature the story of Diogenes and the lamp came to mind. A holy man holding a light he cannot see felt like it fitted really well with a paradoxical, bleak reading of Age of Sigmar.

I started to think along lines of post apocalyptic story settings and how they pivot  around a single scarce resource. What if that scarce resource was light and hope? That would make any lamp, or flame coveted, and revered. A cult built around light and illumination in a land of figurative and literal darkness grew in my mind, and the lamp bearer became not just a lone figure, but a representative of a harsh creed bred from bitter times.

Painting
In terms of painting, I tried to do everything that I would not normally do. Normally, I basecoat and highlight my miniatures conventionally. The Lamp Bearer did not get that treatment, but instead was blasted with black undercoat, and then a crude spray of white from above using Corax White in a can. Everything, apart from the metals and the wood of the staff, were done with washes and inks, all worked wet over the undercoat. A few extreme highlights on the hair and Typhus Corrosion worked over the metal of the lamp and hem of the robe finished it off. The base deliberately blends with the colours of the miniature with just a little red rust weathering powder for contrast; he is meant to feel like his robes are dusted with the earth he walks over.

*If you don't know that is head over here for a good summary. Essentially, it is a creative movement that takes Warhammer: Age of Sigmar and looks into its hidden corners with night tinted spectacles. A bit of searching on Google images and Instagram is probably the best way to find out what it's all about.