Your Questions, My Answers

June 03, 2018
Two weeks ago (ish) I submitted myself to question by internet. Here are the all the answers:


The Horusian Wars, Inquisitors, Incarnation, and all that stuff 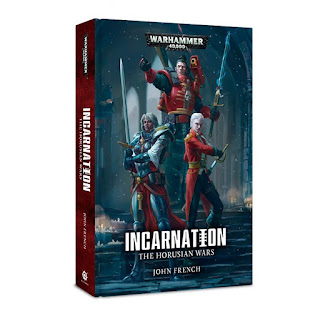 What (when) the heck is the Horusian War anyway?


This may be an obvious question but what drew you to the old Inquisitor characters (Covenant in particular) after all this time?  Are they characters you always wanted to write about?

It’s kind of simple. I always wanted to write an Inquisitor series. I love the Inquisitors more than any other part of the Warhammer 40,000 universe. They are just so diverse, and human and flawed and maybe the ultimate expression of the future dystopian horror show that is the Imperium. The Inquisition Wars by Ian Watson captivated me when I read Chaos Child as a teenager.

Then this game called Inquisitor came out in 2001. The background for it blew my mind. Here was not a unified organisation, but something shadowy and divided and infinitely more interesting. I went to Games Workshop and bought the starter set. There were three, each with a different Inquisitor in the pack. I chose Covenant.


How many books will there be in this series?

Plan is for a trilogy, but the short stories are adding up fast so they might get a volume to themselves (lets hope).


Would you kindly help me sort the series chronologically?

If you mean when it takes place, it takes place in the ‘now’ of Warhammer 40,000, after the Gathering Storm, while the Great Rift divides the galaxy and Chaos and darkness pervades everything.

As far as what stories to read in what order, try this:
-The Purity of Ignorance
- The Son of Sorrows
- The Maiden of the Dream
- The Absolution of Swords
- Resurrection
- Incarnation


Will/how does the Horusian wars tie in whit other things happening in the wider galaxy, cicatrix maledictum, the indomitus crusade and so on?

Currently, it is all about the age of the Dark Imperium and what it means, but will Guilliman and a bunch of Primaris space marines turn up? Unlikely. The Emperor, though… maybe.


What are some of your real-life inspirations for cults and secret wars like those fought by the Inquisition?

All of life in Warhammer 40,000 is dominated by what we would consider cults. The Imperium is itself built around a profusion of cults; the endless different cults of the Imperial Creed, the sects of the Adeptus Mechanicus, the depatments of the Adeptus Terra, which is itself a priesthood of government.

So, for me it’s more about thinking what it’s like being in a society pervaded by that type of thinking. Books about the Cathar Heresy, the Albigensian Crusade and the medieval mindset are a huge inspiration (The Perfect Heresy by Stephen O'Shea, Montaillou by Emmanuel Le Roy Ladurie, and The Waning of the Middle Ages by Johan Huizinga to pick out a few). 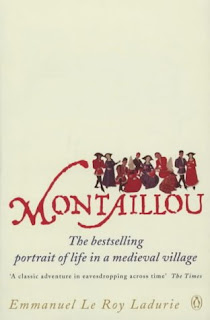 I also find a lot of the post-enlightenment occult societies fascinating and a fair amount of that probably permeates my work.

What's the status of proposed crossover with Vaults of Terra series by Chris Wraight?

It’s something we have jokingly mentioned a few times, but if we can find a way of doing it, and it being good we might just make it happen.


When will the infamous Junt Jaeger appear!? ;)

For those that don’t know (most people)  Junt Jaeger was a character in a 40k role play game I ran a long time ago. He was a Imperial Navy armsman infamous amongst those that know of him for ability to deal with 90% of situations with a a pump-action shot cannon.
The answer is… who knows, maybe one day.


Will we get to know more about Covenants past?

Actually,  in all seriousness, his past will become more and more important as the series moves into the second and third books.


Will we see Ivixia Dannica and Witch Hunter Tyrus at some point in the series?

They are not currently planned to, but I have been thinking about whether they will crop up in short stories or novellas. Dannica in particular is someone who would be great to include… hmmm… more thought needed.


Do you think the various short stories about Covenant's retinue could become a collection, like Ahriman: Exodus?

That’s the plan, but I have to write them first, and there are quiet a few still to go: Viola Von Castellan, Preacher Josef, Cleander Von Castellan, Severita, Glavius-4-Rho, Agata, Orsino, Iaso, Enna Gyrid, Epicles…


What are the odds that Damien 1427 might get a sneaky cameo in a tale?

Oh my! How had I forgotten this guy? The answer is that the chances are much higher now.


Hmmm, is it possible to mechanise you in some way to maximise writing speed to get more Horusian books?

It is being investigated.


Do you have a favourite cult or cult concept that you've worked up/created?

I have a lot of love for the cults and weird concepts that Alan Bligh and I came up with for Disciples of the Dark Gods. Particular favourites being: 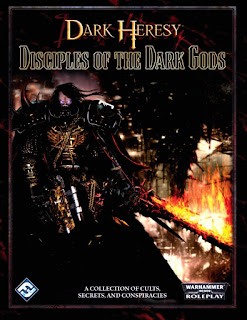 - The Menagerie, a Tzeentch cult that is all about revelation and insanity combined with the idea of a carnival horror show – ‘Come and see! You must come and see!’
- Another being Ateanism, which is literally a concept that has the power to corrupt by promising to show the truth of all beauty and perfection to those who pursue it. It’s also a very different take on how Slaanesh corrupts mortals compared to what a lot of people think of.

How do you structure plot-twists so that they are engaging to the reader? Do you leave enough hints for the reader to figure out or do you prefer to have the characters and reader on the same page (pun not intended)?

The way I usually write, the reader is always going to know more than an individual character, because the reader gets views from lots of points of view. But… I like playing around with readers' perceptions and reactions. I always try to leave clues in plain sight about what is going on in a story. But I try and make it so that a reader won’t realise what those clues mean until just before I pull back the curtain on what is happening. Hopefully, if you go back and read any of my more twist filled stories again, you get a different experience because you can see things differently.

What do you find hard writing about daemons?

Sometimes a story needs part of it to be told from a daemon’s point of view. And that can be tricky because they are not even slightly human. When I put the Changeling in Ahriman: Unchanged I wrestled with its appearances for ages. Had I made it too relatable, too understandable? Had I made it too not understandable enough? That’s the tricky stuff.


What is your role in the Horus Heresy series - and what is it like to be involved in both the FW team and the BL team? How does it all work?

It’s pretty great to be honest! I am one of the main writers for the Horus Heresy novel series which means I get to go to all the secret meetings, put forward ideas, and then go and write books. I have contributed as a freelancer (writer for hire, mercenary wordsmith) to the Forge World Horus Heresy books off and on since they started coming out, particularly the first three: Betrayal, Massacre, and Extermination. I still contribute the odd bit here and there, and help out how I can, but most of my writing time on the Heresy is on the novel line.


What kind of fiction and non-fiction do you read? What kind of news sites, literary journals, etc?

I read a lot across as broad a range as I can: history, literature, poetry, fantasy, philosophy, sci-fi, books on religion, the occult, more history, horror, historical fiction, graphic novels of all kinds, YA, crime, thrillers, and so on. I also read stuff  that is bad as well as good, and things that I don’t think are my taste, and things I disagree with. Frankly, I love reading. It’s the key to knowledge, and one of the best things ever. Only ice cream is better, because ice cream.

To give you a slice through my recent reads and re-reads:

If you follow me on Goodreads you can see what I am reading and laugh at my failure to make a dent in the ever growing book pile.